As I wandered through pet stores and humane societies on that cold November afternoon in 1989, Missy was wandering the crowded streets looking for me. Now this may sound corny to anyone except a dog lover, but it’s true.

My search for a puppy was done secretly. When our last dog, Wendy, died my husband John yelled “NO MORE DOGS! It hurts too much when they die.” I said “Okay” in my yeah-but-I-want-one-anyway tone. Let’s face it; our home was just not the same without a dog to greet us. I missed having a floppy-eared, furry faced, cold-nosed dog greet me with a lick on my ears.
When Missy first saw me walk back to her cage at the humane society, she knew I was the one. Regardless of popular belief, dogs pick their master–not vice-versa. The eight-week-old black ball of fur really put the charm on me. She gave me the happy-tail complete with ear lick and nibble, and had the bright-eyed, radiant glow of a puppy who just found a home.
I was told she was a Lab mix. A Lab! This was perfect because we had just purchased a sailboat a month earlier and needed a sailing dog. I donned Missy with a bright red collar and tag, and we headed home for an uncertain welcome (or not) from John.
John was so upset with the idea of another dog that he had nothing to do with Missy for a couple weeks, at least not when I was around. Missy worked her magic on him as well and soon the two were good friends.

Missy was eight months old when she first entered our sailboat Impulse, but I think she knew immediately that this was going to be her boat and that she (not John) would be the skipper. She loved the water. She soon learned how to jump off the back of the boat while we were docked and go for a swim. The amazing part was that she could to climb the ladder by herself. This trick made her a celebrity at the marina. Everyone nearby came to our boat to see the swimming, ladder climbing dog.

Missy had great sea legs and she could sprint from bow to stern on Impulse with the grace of a deer. She liked to be at the helm to help navigate, and also told us with a bark when the sails needed trimming. She always sniffed out the shoreline where our marina was. When she tired of sailing and wanted to go home, she nosed the keys in the boat ignition. 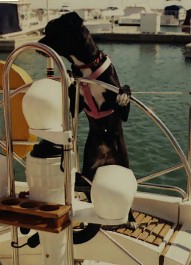 Her intelligence was downright scary sometimes. I told John once that I thought she was a space puppy sent to Earth to monitor human activities and emotions. He laughed and asked me if this was a plot for a new novel I was working on. My answer was simply a wink, a kiss on Missy’s muzzle and a smile.
Now don’t get me wrong, Missy was not without her faults by any means. For example, she thought that if she allowed anyone on Impulse or in our home, that they should immediately take a seat and never leave. When visitors would get up to leave, Missy would immediately give them her don’t-even-think-about-it bark. This strange manner of hers began to make more sense when she started to develop the sleek body and small head of a Doberman. Now we knew what the Lab mix was mixed with!

The years swiftly sped by with Missy swimming in the summer and romping in the snow in the winter till her sleek black fur coat turned whiter and whiter with age. She remained as strong as ever, and her body stayed muscular from all the swimming.

It was not till her twelfth autumn that she even slowed her active pace. She started sneezing quite a bit, and at first we thought she had developed allergies. It was when the sneezing lasted well into the night and winter approached, that we got concerned and consulted a vet. Tests were done, antibiotics given, but the sneezing and breathing difficulties continued. More inconclusive tests were done, and we finally took her to Indiana’s Purdue University Veterinary Center in Lafayette. A rhinoscope, x-rays and cultures were done. Cancer.

We didn’t want to accept that Missy could leave us so soon. She was still eating well and was still strong as an ox. But she began hiding under the table and in corners more and more. Her eyes started to squint as if the light was hurting them. When she started to have trouble walking, we knew that we had to make a decision.

“Missy has given you both the most love and companionship that she can, but now she is in pain and needs your help.” the veterinarian said “You should be with her to the end to say good-bye.”

I was at the university teaching a composition class the following day when I received an emergency phone call. It was John. “I called the vet and am going to take her in. I just want to make sure you are O.K. with it,” John said.

“I’m O.K. with it.” I hung up, went back to class, dismissed my students 10 minutes early, closed the door and cried.

My mind raced back to the eight-week-old black ball of fur that really put the charm on me twelve years ago. I remembered her small floppy-ears, black furry face, and cold wet nose that gave me ear licks and nibbles. It seemed like only yesterday that the bright-eyed bouncing puppy came home to live with us. I visualized the swimming space dog that was as agile as a deer and loved to navigate our sailboat.

Tears flowed hard and burned my cheeks as I thought of the panting, gray-black dog that I had kissed just a few hours before.
We put the sailboat up for sale the following week. It was something we had been talking about for a while, but without Missy, the times on the boat just would not be the same. It was the end of an era.
“Don’t rush me into getting another dog,” John said.

“Don’t worry, I won’t,” I answered.
The following day I found the paper open to the Dogs For Sale section of the newspaper. 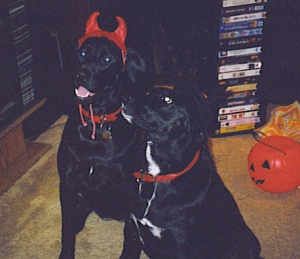 You may wonder if we ever did get another dog. Well, not exactly. We got two. One is a Lab-mix, and the other is pure Lab. Their names are Mandy and Chrissy.
The truth about dogs is that every time a puppy or dog is rescued, that puppy or dog rescues the rescuer right back. And so that was the way it was with us
— and now it all begins again.

**The above printed material is copyrighted, is registered with the Library of Congress and is the property of Sharon Palmeri. Permission is needed before use. Thank you! *S* **